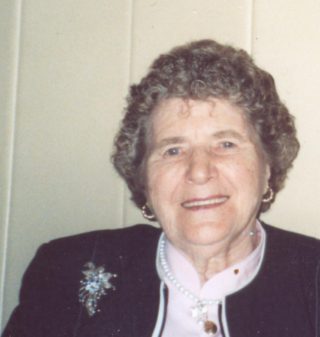 Nora has many tales to tell of her youth. She grew up in tough times and the following is an account of her life experiences and some interesting facts.

I begin my story in 1942 when sadly my family was orphaned. My brothers and sisters and I, six of us in all, were living in a thatched cottage in a quiet corner of the parish at the time. We had no choice but to adjust to being left alone without parents. No one looked in on us and no handout came through the post; we just had to get by. ……………..

We didn’t have much money in those days. There were no jobs about, so we just worked on the farm, making hay, tying oats, pulling beet, weeding, picking fields of potatoes, tilling and harrowing the fields for sowing the crops. My elder sister, now deceased, did the cooking and housework, baking, etc. I did all the washing with a washboard and tub. I had to heat the water in a big pot – no soap powders, only a bar of washing soap and some washing soda. There was no electricity then, so no press-button machines either.

…………..We had lots of hens, and eggs brought in some money and helped us pay for groceries. When I think back, we were a happy family, singing and dancing to our own music and visiting the neighbouring families. ………..

Before I got married, I worked in a Bed and Breakfast in the West End and I also worked in the electrical department of Woolworths. ……

When we decided to get married, my sister-in-law said she would throw a party for us, so we set a date, the 5th November 1949. The wedding took place just after World War II, in Shepherds Bush, London. All food and clothes were rationed and we were all issued with coupons, so we had to be very careful in choosing what we wanted.

On my wedding day I wore a petrol blue coat with a grey dress ……… My sister-in-law talked nicely to her butcher and he gave her a big piece of salt beef that she cooked with plenty of vegetables and she also made a dessert. We had drinks, some dancing and singing, Our marriage cost us no more than £50. I was married for fifty-seven years.

When we came home, I had to work out in the fields. Both Michael’s parents were alive at the time and Granny used to work in the house. When I was working in the fields, I used to lay the baby on a blanket in the field, nearby.

…..He was a quaint old man and wore a hat, strong shoes and a big topcoat. We loved to see him coming as he used to sing old ballads and tell stories. He would come across the fields with his sticks across his shoulder. He had a little bag of food he had collected on his way. He would make his tea and boil a couple of green duck eggs in a saucepan on the fire and light his pipe.

After his tea, he got his bed ready in the corner of the kitchen. He went out to the haggard and pulled some straw together for a mattress. .

The full interview with Nora can be read on Pps 460 – 463 of Killererin – A Parish History which is available to purchase locally or elsewhere on this site.