interviewed by Bernadette Forde and Mary Dunleavy in July, 2012 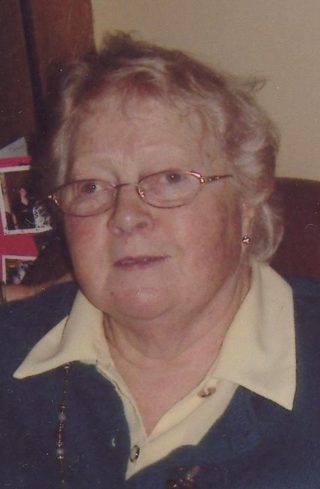 The following article has been put together for our Gastronomy Galway 2018 project. Most of the interviewees for our Parish history book were from a farming background and the common themes throughout are diet, threshing, stations, killing the pig, going to fairs etc. I hope you enjoy reading these extracts and that you get a sense of what life was like for past generations in this locality.

“I was born into the Fahy family of Tygreenane, Barnaderg, in 1932. My parents were Brigid Lyons and John Fahy and they earned their living on the family farm. When they got married, there was only a blessing in the Church as there was no Mass at the time. I had six brothers and two sisters and my Aunt Katie also lived in the house with us. I married Michael Donnellan RIP on 29th June 1963, the same day as President John F. Kennedy came to Galway city.

My home place was a typical house of the time. It had two bedrooms. All the girls slept in one room and the boys in the other. There was also a settle bed in the kitchen. A settle bed was a piece of furniture shaped like a long narrow rectangle which opened out to form a bed, and blankets for the bed were stored in it. ……….

My father was a farmer and he also used to cut the hay and corn for the neighbours as there was no other mowing machine in the neighbourhood. …………….

When my brothers and sisters and I came home from school, we were expected to gather the eggs from the hens and make clean beds for them. ……there were many chores such as looking after the sheds, making butter and baking. We used to cook a big pot of potatoes for the hens over the fire and all the animals had to be looked after. We used to keep pigs, cows, calves, horses, a donkey and sheep. I remember when the sow had her bonhams, we used to have to stay up at night with her or she would roll over on top of them. The horse was used for ploughing, tilling and sowing, and bringing home the turf, hay and corn. The donkey also was a working animal, used more in the bog.

Killing the pig was a big farming tradition and the man that used to carry out that task in our village was Tommy Duggan. The first thing that was done was to tie the pig to the cart.  He would be stretched out on top of the cart and then his heart would be pierced with a sharp knife. The noise of his squealing could be heard for miles around. When the pig was blooded, the intestines were cleaned and filled with a mixture of blood, oatmeal, nutmeg, mixed spice, etc. and made into puddings. The puddings were turned inside out and boiled in a pot with hay, maybe to stop them bursting. This work was usually done by the women and in the meantime the men got to work on the carcass.  The skin was shaved with boiling water and then the carcass was filleted and salted and cut into fletches. Spare ribs and grisheens were given to neighbours.

Threshing was a big event on a farm. For the threshing, two people used to work together and a meitheal was formed with the neighbours who would all come to help. We would do the same for them, helping out on their farm when it was their turn. The housewife was also very busy getting dinner and tea for the workers.

Oats was the main crop sown, with some wheat and barley. Oats and barley were kept to feed the stock and poultry on the farm. The wheat, when threshed, was sold to a mill and made into flour. Whole oats were fed to sheep and horses; sometimes oats would be brought to a local mill and rolled to be fed to cattle. The corn, when brought into the farmyard, would be made into stacks in the haggard, raised off the ground on a stand made of stones and timber. If the corn was left there over the winter the stacks would be thatched with straw held in place with scallops (made of hazel) and straw ropes.

The threshing machine was worked by a tractor, probably a Fordson Major (the maker of the threshing machine was Garvie), with a pulley wheel and belt. There was a pulley wheel on both tractor and thresher. When the machine was up and running, two people would work together, a man on the stack would fork a sheaf to another man on top of the thresher to cut the band (that was tying it together) and feeding in to the thresher and another person would feed it into the drum. The corn came out one side and the straw on the other. The corn came out in three shoots into 2-cwt canvas bags attached by hooks and stored in the barn. The corn was graded, two shoots clean and one shoot with chaff in it.  One or two people would look after the corn. On the other side, two men would be taking away the straw, one forking it to the other to make into a cock.

When the threshing machine came into an area, it would thresh for all the farmers in the area or village. It was really a social event and when the day was over and the threshing was done, we would have a party and all the workers would share a lovely meal and there would be a sing song later. ………..

Some farms in the village would have visiting workers or ‘Spailpin Fánach’ as they were known, who used to come year after year and to help picking the potatoes, beet and turnips. ……………….

During the day, as a family, we enjoyed two full meals. Breakfast consisted of brown bread and a boiled egg. Dinner was at 1.30 or 2p.m. and we usually had chicken or bacon, both of which were home produced and plentiful. On a Sunday, we would have either roast chicken, beef or lamb, followed by jelly and custard. Jelly was not like now – it was like fine sugar then.

At Christmas time, we would go to town for the extra shopping. A goose would be bought for Christmas day but first we would have to sell our turkeys and ducks.  The alcohol that would be bought would be porter and a Winter’s Tale (sherry). There would be no shortage of meat at Christmas time.  We would also have rich cake and jelly and custard and a rare treat of chocolate. The sweets of the time were caramels, bull’s eyes, Peggy’s leg, liquorice snakes and sticks of rock.

A travelling shop used to come to our door every week. We used to have two calls a week, one from Christy Mannion’s travelling shop and the other from Cheevers’ from Moylough. The eggs our hens produced used to pay for a lot of our weekly shopping. The items we used to buy regularly were tea, sugar, flour, sometimes raisins and currants, and cigarettes. ..

The Stations, where Mass was celebrated by the priest in a house, still happens today. When I was growing up, it was a huge affair to get ready for the Stations. ….. We also had to raise the table so the priest would not have to bend while saying Mass.

The priest was held in very high esteem and after Mass Fr Kenny who was the parish priest at the time, along with his curate and clerks (as the mass servers were known at the time), were served their breakfast in the parlour (good room). The table would be set with an egg stand and saucer, egg spoons and side plates. As well as the boiled egg they would be given brown bread and cake. Nobody ate until he had left the house. ….

For cattle, sheep, pigs and horses March and October were the two big Fairs in Tuam. Fairgreen, at the top of Tullinadaly Hill on the right, was the place to be in March if you had cattle, sheep or pigs and an extra day was laid on in October for horses, mostly yearlings and foals.

On Fair day, they would leave the house at approximately 2a.m. and walk the cattle and sheep to Tuam.  The farmers would have help to drive the cattle, etc., usually neighbours or family members. They would have a flash lamp and stick and a person would go in front of the cattle to stop the stock from going into yards and gaps in fields. On arrival in Tuam, they would stay on the streets and when it got bright they would move down to the Fairgreen (cattle). On days of sheep fairs, the farmers would put down pens in the Fairgreen with wire and stakes to hold the sheep the day before. Each farmer had a certain place held each time of the Fair for their pen.

The farmers would ask a certain price, and usually a deal would be done by the buyer involving other farmers. ‘Clapping of hands’ took place to seal the deal. When a buyer had bought the cattle, they marked them with raddle and gave the farmer a ticket. The farmer went outside the bank to be paid cash by the buyer (the name of bank would be listed on ticket). Then the farmer brought the cattle to the railway station to be transported to the buyer’s farm. The main buyers of cattle were the Bruton brothers (father and two uncles of John Bruton – former Taoiseach and Richard Bruton TD). Buyers always looked for luck penny after paying the farmer.

Sheep sold were usually a year old ewe hoggets and weathers. Butchers would be buying weathers for killing. Ewes would be sold for breeding. The sheep then were usually the Galway breed.

Farmers sometimes went to Galway to fairs. They would usually leave the cattle the day before at a farm on the outskirts of the city. Another fair farmers usually attended was the Horse Fair in Ballinasloe. Farmers bought foals and yearling fillies and colts, mainly Irish draught, a working breed.  They would have kept the horses for a year or two and trained them for pulling a cart or ploughing and then sold them on to farmers. Horses bought were walked home as there were no horse boxes then, only bicycles to follow them.

Sheep shearing was another big day on the farm. The farmer would be gathering his sheep from early morning, setting up pens for sheep, and the number of shearers would depend on the size of the flock.  Usually, there would be eight to ten men shearing, a man with a crook catching the sheep, and two people tying the wool and taking all the dirt (daggings) of the fleece. Wool packs would be tied up to the rafters of the shed, held on four corners. Wool fleeces were put in packs and packed tight; when full, the packs were taken down and sewed with twine to fasten. When the sheep were shorn, they were branded with the farmer’s mark. Food and drink would be in plentiful supply that day – usually half a barrel of porter on tap. A party was held when the work was done. May was usually the month for shearing. Children on the farm helped carrying fleeces from field to shed for packing.

The full interview with Peg can be read on Pps 463 – 471 of Killererin – A Parish History which is available to purchase locally or elsewhere on this website.