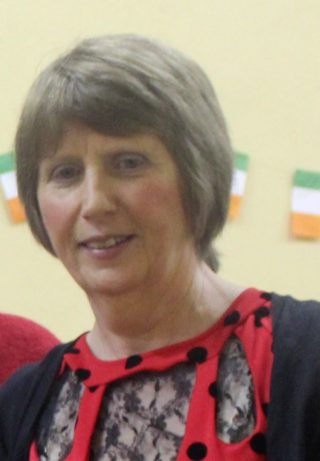 The following article has been put together for our Gastronomy Galway 2018 project.  Most of the interviewees for our Parish history book were from a farming background and the common themes throughout are diet, threshing, stations, killing the pig, going to fairs etc. I hope you enjoy reading these extracts and that you get a sense of what life was like for past generations in this locality.
Bríd Fahy was born in Peak in the 1950s. She has lived there all her life.

A number of families lived in thatched houses in the townland of Peak; these families are not around anymore and their houses are no longer traceable. ……………….

The local shops were Mannion’s and Keane’s and Mrs Fagan’s. A cone-full of bull’s-eyes could be purchased from Mrs Fagan for a penny or two; the cones were made from pages of old copy books. ………… Going to the well for water, picking potatoes, going to the bog and saving hay were mandatory for children as well as adults. People shared horses and labour for big jobs and a typical example was when Mattie Dolan, Brierfield, came to each house in turn with his thresher in the autumn or early winter.

Running water came to all homes in the area in the 1970s when Fr Jennings formed a committee to set up a Group Water Scheme. William Hanrahan served as secretary.

Fr Jennings also created a new tradition of having stations in the houses in Peak. Before this, Peak families had their station masses in the church. He did not want to impose on people and insisted on tea and a biscuit only for refreshment with a boiled egg and brown bread for his own breakfast….

The full interview with Bríd can be read on Pps 457 – 458 of Killererin – A Parish History which is available to purchase locally or elsewhere on this website.