interviewed by Bernadette Forde and Mary Dunleavy in October, 2013 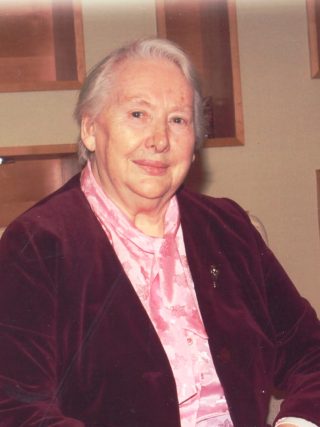 The following article has been put together for our Gastronomy Galway 2018 project.  Mary passed away on 11th January, 2014. Most of the interviewees for our Parish History book were from a farming background and the common themes throughout are diet, threshing, Stations, killing the pig, going to Fairs etc. I hope you enjoy reading these extracts and that you get a sense of what life was like for past generations in this locality.

I was born Mary Cunningham, daughter to Sarah and Stephen Cunningham of Annaghill, on the 31st October 1918. I had 3 brothers, Patrick, Joe and Sean. My father was a farmer, ahead of his time in some ways. He had worked on a farm in Roscommon looking after a herd of fifty cows. In the days before tagging of cows was obligatory, he kept a notebook detailing the name of each cow, the daily milk yield and the lactation period. My mother had a singer sewing machine and made my christening gown and shirts for my father. She also baked every day, despite having severe arthritis in her fingers from an early age. Both my parents spoke Irish.  ………

It was forbidden by the church to eat meat on Fridays. When father had potatoes or oats to sell, he would travel to the Galway Market (15 miles) in his horse and cart and bring home fish. Otherwise, we relied on a travelling fishmonger who called on Friday mornings with his donkey and cart. Marriages were not permitted during Lent and dances could only be held on St. Patrick’s night. The Mission was always held during Lent. The church was packed every night to hear the visiting priests breathing (roaring) hell-fire and damnation and the fear of God into all present.

My parents reared geese, ducks and hens. Some days before Christmas, my father would kill a goose and pluck it. Mother prepared it and on Christmas Day, our goose was cooked in a cast iron pot on the open fire.

The duck down was used as filling for pillow cases. Pillow covers were made from bleached flour bags.  Mother would have made a Christmas cake, which was very special as dried fruit was precious. A separate cake made with caraway seed was baked specially for my brother who disliked dried fruit.  One morning, my eldest brother made a pot of tea and on drinking it realised he had put caraway seeds in the pot, ugh! …….

Stations were held in this house once every twelve or thirteen years. Whitewash was prepared and internal and external walls were painted. White linen cloths were washed, starched and ironed specially for the occasion. The iron was heated from the open fire and, when considered hot enough for the job in hand, a steel cover was attached. After the Mass, the priest dined on a boiled or poached egg in the parlour in the company of the householder. Neighbours and friends – totalling thirty-two – were treated to a fry which was cooked in a cast iron pan on the open fire. The priest was usually the first person to leave and as soon as he was out of sight, porter from a barrel and a bottle of whiskey were produced. The talk began in earnest. It was a wonderful social occasion.

Fairs were held locally two or three times a year in the villages of Abbeyknockmoy and Turloughmore. It necessitated rounding up the animals the day before, holding them in sheds or pens overnight and setting off early on Fair day. My father drove cattle to the fair in Athenry, a journey of nine miles. He set out at 11p.m. the night before and walked through the night. When the cattle were sold, he returned home by train to Ballyglunin station. Bringing wethers (sheep) to the fair required a certain degree of agility as they were partial to grass in any field en route. In the towns and villages along the route wheelbarrows, shovels and buckets of water were the order of the day on the day after the fair.

At harvest time, the corn was cut with a binder and the sheaves were made into stooks around the field for drying. They were then transported to the haggard and built into large stacks. Some weeks later, Paddy Delaney arrived with his thresher and a meitheal in tow. It was dusty work. Rats could be seen scurrying in all directions. The oats were stored as feed for the animals and the straw was used as bedding. When the job was done all the men came back to the house for a meal of bacon and cabbage.  It was then on to the next farm.

The full interview with Mary, can be read on Pps 417 – 421 of Killererin – A Parish History which is available to purchase elsewhere on this site.