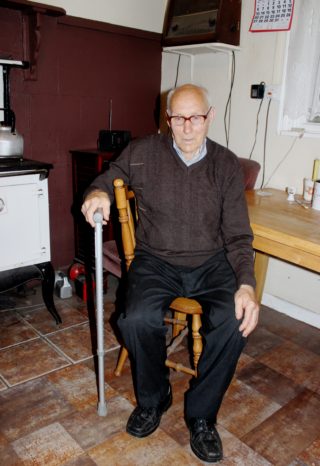 Johnny Potter in his home in Derrybaun
Bernadette Connolly, Clogherboy

The following article has been put together for our Gastronomy Galway 2018 project.  Most of the interviewees for our Parish History book were from a farming background and the common themes throughout are diet, threshing, stations, killing the pig, going to fairs etc. I hope you enjoy reading these extracts and that you get a sense of what life was like for past generations in this locality.

I was born in 1920 in Derrybaun, and have lived here all my life. I had two sisters and one brother. We lived in a thatched house but our new place was built, I think, in 1954. There were originally eight families in the village, but the five I recall most were the two Mulry families, the Byrnes, the Stones and the Potters themselves. …………….

The 1920s were hard times in Ireland. Many people emigrated during that time. Like many villages though, people made do and were very self sufficient. We had everything bar tea, sugar and flour. While these supplies were bought in the shop we had everything else. We would kill a pig every year, maybe two, but one for the Christmas was regular and that would be shared around. That is the way it was everywhere.

At the market in Tuam, we would sell cabbage and we travelled there on the horse and cart. We would often sow potatoes on land near the bog, and these would make great seed potatoes, but they were not for picking and eating. If anyone wanted seed potatoes, they would be sent to the patch of land near the bog to get them. In the area of the field opposite our house, up the hill a bit, the Mulrys sowed a garden. Indian meal was also used by people at that time. It was eaten by man and animal, and you could buy it easily in the shop. I used to put it down for cows and calves but mostly it was for pigs and bonhams. A pot of that boiled at night – you could not eat anything nicer than it.

There were a lot of markets and fairs at the time. ……….As well as Dunmore, I would sometimes go to Mountbellew and Glenamaddy. I often went with the horse and cart to Glenamaddy with pigs, but I was never at the fair in Castleblakeney. There was also a horse fair in Turloughmore every August, and one for fillies and foals in Abbey, but Dunmore, Tuam, and Mountbellew were the three main fairs. Mountbellew used to be a big place one time. In fact Mountbellew fair was so big you could not stand it. Sometimes, my father would buy a cow, and it would have to be walked home from the fair. ………..

This interview can be read in full on Pps 453 – 455 of Killererin – A Parish History which is available to purchase locally or elsewhere on this website.