Interviewed by Mary Geoghegan in June 2006 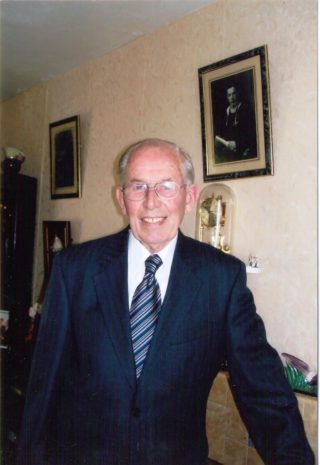 The following article has been put together for our Gastronomy Galway 2018 project. Ger passed away on 26th October, 2012. Most of the interviewees for our Parish history book were from a farming background and the common themes throughout are diet, threshing, stations, killing the pig, going to fairs etc. I hope you enjoy reading these extracts and that you get a sense of what life was like for past generations in this locality.

Gerard Morris (Ger) was born in Barnaderg and lived all his life in the village. He remembered the shops and pubs and their owners down through the years.

He remembered where the Centra supermarket is now. It was built by McHugh’s in the 19th century. It was a thatched shop and they also had a post office. One of the Whyte girls from Cloondahamper worked in the post office. The building was closed for years until Bobby Gilmore of Moylough bought it and reopened it. After some years, he sold it to Christy Mannion from Corofin. Christy also ran a travelling shop. After Christy died in 1984, his wife sold on to Miko and Bridie Keane. They opened the first supermarket in the village. Miko and Bridie sold on to the present owners Patrick and Anita Stone. Other shops in the village were run by May Comer (nee Stone), Mary Fagan and the Keane family.

Joyner’s used to be a barracks. Later, Pa Morrissey’s ancestors used to own Joyner’s; they had a license to supply pubs with drink. Thomas Hession built the pub that is now the Red Gap. His son James took over from him and he sold to James Fahy, Tuam. They sold groceries, hardware and drapery. ……

There used to be fairs in the village but they did not last. Pigs and weanlings were sold in the green where the grotto is now; this is where the market house used to be. Keane’s hill used to be Bane’s hill; Bane had a forge where Sylvester Cassidy’s house is now (200 yards from the village on the left, at Peak). ……

The full interview with Ger can be read on Pps 441 -442 of  Killererin – A Parish History which is available to purchase locally or elsewhere on this site.