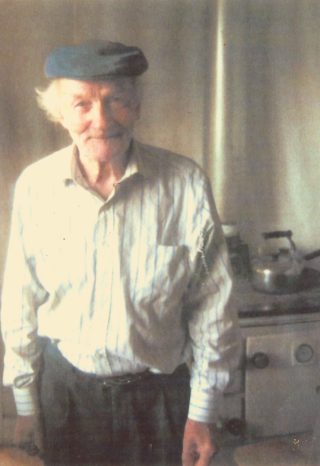 The following article has been put together for our Gastronomy Galway 2018 project. Joe passed away on 10th October, 2011. Most of the interviewees for our Parish history book were from a farming background and the common themes throughout are diet, threshing, stations, killing the pig, going to fairs etc. I hope you enjoy reading these extracts and that you get a sense of what life was like for past generations in this locality.

Joe was born in Carragh, Caherlistrane, in 1920. He was 88 years of age at the time of this interview. He came to live in Derrybaun in 1950. He came from a family of ten, seven boys and three girls. Joe went to school in Caherlistrane which was a three mile walk – in bare feet. November day they got new clogs with tip toes which were made from wood with a leather upper. He found them very warm.

Joe was a part-time farmer in Derrybaun. He grew beet, potatoes and oats, and he had hens, which provided him with eggs. He used to work and help out on farms in the district for an extra bit of income. He also worked in the sugar factory in Tuam for the campaigns; he worked three shifts of eight hours and cycled to and from work. ….

Germans built the sugar factory in Tuam. While the Irishman would turn his jacket inside out and throw it on the ground before he started work, the German would make a hanger and hang up his jacket. There were queues outside the factory gate of men looking for work. Before the campaigns started, the men would get a card in the post to have a medical to see if they were fit for work. Joe worked as a utility man and the timekeeper would tell him what jobs needed doing. As a utility man, he got a penny an hour extra, with a half hour break during the shift. There was a canteen for the factory workers.

Joe liked the evening shift – 4p.m. to 12p.m. There were about two hundred men employed at the height of the campaign which lasted for twelve weeks to start with, but then was cut down to eight weeks. It was very hard work and some workers found certain areas very hot, which caused exhaustion. At the end of their working week, some of the workers would go for a drink to O’Brien’s pub on the Dublin Road, now the Hare Inn.

There was a weighbridge inside the front gate of the factory for weighing the beet going in and weighing the pulp coming out. The amount of pulp farmers received went by the acreage of beet they had. They were charged for the bags but when the bags were returned they received half a crown. Willie Dolan, Dangan, was one of the first to get a car and he would collect the men of the area and bring them to the sugar factory. All the farmers had to sow beet to get employment in the factory. During the war years, the beet growers used to get a 4-stone bag of sugar from the factory. General Costello was the head manager of the sugar company. There was also a local manager, a timekeeper, a walking foreman, an engineer and a supervisor on each shift. Some of the other bosses came from other sugar factories to work in the Tuam plant. There were houses built for the managers at Airglooney, beside the factory.

The full interview with Jo can be read on Pps 437 – 438 of Killererin – A Parish History which is available to purchase elsewhere on this site.