Memories- Margaret Monaghan (nee King, Clogherboy) given to Killererin Heritage Society by the Out and About in Killererin Magazine Committee 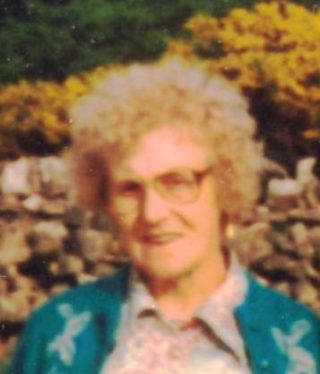 The following article has been put together for our Gastronomy Galway 2018 project.  Margaret passed away on 26th April, 1999.  Most of the interviewees for our Parish history book were from a farming background and the common themes throughout are diet, threshing, stations, killing the pig, going to fairs etc. I hope you enjoy reading these extracts and that you get a sense of what life was like for past generations in this locality.

I remember the house where I was born in Clogherboy. It was a 3-roomed house, which would be small by today’s standards. There were 2 bedrooms and a kitchen. There was no bathroom or toilet. There were 6 of us in the family, as well as my father and mother and grandparents. The children were Mary, Ellen, Sadie, Margaret (myself), Paddy, Jackie, and Christy. …

We were small farmers by today’s standards, but still made a living. It was mostly two cows, a few cattle, maybe twelve or fourteen sheep, and a few pigs. We had a big flock of hens, some ducks and geese. We had no turkeys until years later, when every household had some. We sowed potatoes, oats and turnips. The hay was cut with a scythe, and the thistles had to be picked out before it was saved. The reason for this was that the hay had to be pulled by hand from the big stacks in the haggard, and the thistles would be a nuisance.

The oats was also cut with a scythe. It was then bundled by hand in sheaves and tied. Then it was stooked and later on taken to the haggard and stacked. I remember it being threshed by hand, by my father and Tom Cait, with two flails, one at each end of the barn having every second lash, until it was threshed. Then the straw was taken away and the oats winnowed in a hand winnowing machine to remove the chaff. The winnowing machine was turned by hand, and it was not an easy job. Later on, the threshing machine did all the work, but the seed had to be carried away, and the straw made into a stack. The neighbours helped each other and went around to all the houses. Afterwards everyone got tea and plenty of eggs and bread and butter……..

Up the boreen from our house lived Lukie and Margaret King. They had a small thatched house, down in a hollow. They had no children, but had plenty of the neighbours’ children in and out. I don’t know how they put up with us, but they did. Margaret was nice, she had long brown hair and used to wear it in a big bun, on top of her head. ………..

She used to come with us when we went picking raspberries in Moyne wood and other times, when we would pick rhododendrons. ………

More of Margaret’s memories can be read on Pps 443 to 446 of Killererin – A Parish History which is on sale locally or available to purchase elsewhere on this site.