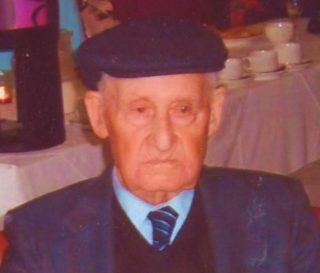 The following article has been put together for our Gastronomy Galway 2018 project.  Stephen has since passed away. Most of the interviewees for our Parish history book were from a farming background and the common themes throughout are diet, threshing, stations, killing the pig, going to fairs etc. I hope you enjoy reading these extracts and that you get a sense of what life was like for past generations in this locality.

Stephen lived all his life in Tygreenane, except for the short while he spent working in England. Tygreenane had six families with the surname Duggan at one time, but none remain today. The names have changed through marriage and the movement of families. Here Stephen recalls some of his memories of times past.

Tygreenane was mainly a farming community and Clonberne creamery was a source of income in the 1960s for those who ‘sent the milk away’. You got 2/6 (2 shillings and 6 pence or half a crown as it was known) for 10 gallons of milk. Every morning and evening the cows were milked and the milk poured into milk cans. These milk cans were collected at the head of the road by a tractor and trailor  from the creamery. In the evening, the cans were returned with the skim milk and the farmer would collect them. This scheme came to an end in the 1970s.

Land Commission offers a move for a better way of life

During the 1950s, the Land Commission offered a ‘change’ as it was known or a ‘move,’ giving some families the opportunity to get a larger area of land and a house in places such as Laurencetown, Eyrecourt or Redmount Hill……..

A great source of local news was the arrival of Christy Mannion with his travelling shop on a Monday evening. The women would have the eggs ready to sell and a list made out of provisions they needed. A bartering system existed whereby groceries were swapped for eggs regularly. Christy was part of the week for many years and provided a great service. He had everything that was needed in the lorry and, more important, he had time to talk. For a short time, Pat Gormally from Ballaghalode also called to some houses on a Saturday evening. He drove a van and carried household supplies.

The red squirrel was a common sight in the trees all along the stretch of road leading to Knock from Barnaderg; the children going to and from school often caught a glimpse of them. Both the trees and the squirrel have long since disappeared.

The full interview with Stephen can be read on Pps 439 – 441 of Killererin – A Parish History which is available to purchase locally or elsewhere on this site.