You are here: Home>Topics>Events>Heritage Tour 2017 - Glasnevin Cemetery and Kilmainham Gaol

Killererin Heritage Society hosted a tour to Glasnevin Cemetery and Kilmainham Gaol on Saturday 15th July, 2017.  We left Barnaderg  at 7.45 a.m. and headed straight for Glasnevin cemetery.  Our tour began shortly after arrival and so the day began.

Our guide proved most entertaining and kept the attention of all present both young and old. He began by explaining the origins of Glasnevin cemetery which was founded in 1832 by Daniel O’Connell and open to people of all faiths  Over 1.5 million people have been buried there, but the graves we visited were:

The tour began at the grave of Roger Casement who was a British diplomat but he became weary of imperialism and eventually became a humanitarian activist, Irish nationalist, and poet. After retiring from the Foreign Office in 1913, he became more involved in Irish republicanism and sought German support and weapons for the Irish rebellion. He was arrested while trying to land these weapons on Banna Strand, Co. Kerry and charged with treason. He was executed at Pentonville prison, on 3rd August, 1916.

Our next stop was the tomb of Daniel O’Connell, otherwise known as “The Liberator” and the political leader who founded the cemetery.    He fought for emancipation for the Irish people and died in Genoa on 15th May, 1847 on his way to Rome.

Many of his relatives are buried in the tomb with him and their coffins were clearly visible in an alcove to the side of the tomb. The tomb was bombed by Loyalists in 1971 and currently efforts are being made to reconstruct the staircase of the tower underneath where the tomb  is located.

Michael Collins or the Big Fella ashe was affectionately known was famously killed in his native county Cork at Béal na Bláth, not long after the signing of the Anglo-Irish Treaty in 1922.  The Treaty led to the country being divided in two with disastrous results for future generations.

He was a member of the First Dáil of 1919 and the Irish delegation during the Anglo-Irish Treaty negotiations. Subsequently, he was both Chairman of the Provisional Government and Commander-in-chief of the National Army.

He still has flowers put on his grave almost 100 years later.

Trade Union activist, James Larkin, also known as ‘Big Jim Larkin’ is also buried in Glasnevin cemetery.  Larkin moved to Belfast in 1907 and founded the Irish Transport and General Workers’ Union, the Irish Labour Party, and later the Workers’ Union of Ireland. He was best known for his role in the 1913 Dublin Lockout,

Last but not least, at our request he took us to see the burial place of Lt. Kevin Gleeson who is a  cousin of Dom Dunleavy who was on the tour with us, fought in the Congo and died in an ambush there along with eight others in 1960.

See his story elsewhere on this website under the category People and entitled ‘Memories of a brave Irish Soldier and his links to Barbersfort House.’

We then proceeded to Kilmainham Gaol where we had our lunch on the premises before beginning our tour.  We were divided into two groups and each group was given a tour and taken to the same areas within the prison.  This was a very informative, enlightening and thought provoking tour of the Gaol and we were shown the cells of the 1916 leaders and the yard where they were executed.

We were taken into a cell of one of the women prisoners where the graffiti written by her, remains on the walls.  Slogans such as Cuman na mBan and Suíochán for peace etc. were clearly visible displaying her defiance to the end.

The tour was very informative and the information provided gave us plenty of food for thought on our way home.  It was a timely reminder of the sacrifices made by very young men and women of that era, which allows us the freedom and prosperity we enjoy today. 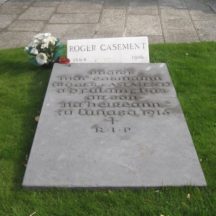 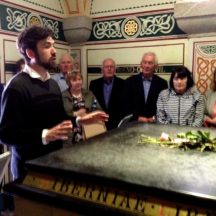 In the tomb of Daniel O'Connell with our tour guide.
Photo: B. Forde 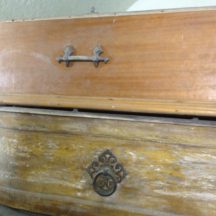 The coffins of Daniel O'Connell's descendants in his tomb
Photo: B. Forde 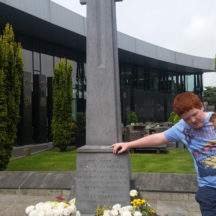 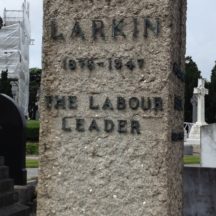 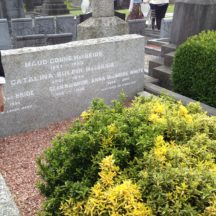 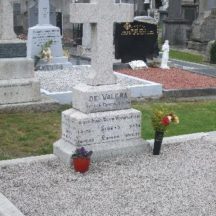 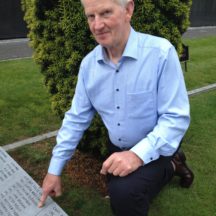 Dom Dunleavy pointing to the burial place of his cousin Lt. Kevin Gleeson who died in the Niembe ambush along with eight others in 1960
Photo: B. Forde 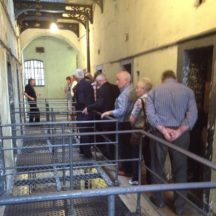 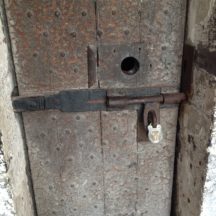 The locked door to one of the prison cells
Photo: B. Forde 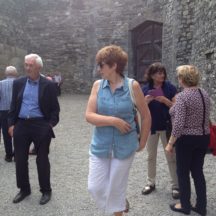 Bridie Keane and some of the Heritage tour group in the yard of Kilmainham Gaol where executions took place
Photo: B. Forde 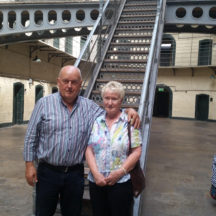 Mattie and Mary Cunningham inside Kilmainham where we were told the acoustics were fabulous and consequently there have been concerts and poetry readings held here. 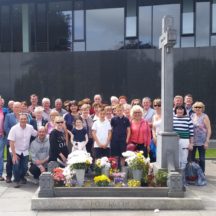