The original church building was a plain neat structure erected in 1796 by a gift of £500 and a loan of £300 from the Board of First Fruits. The latter was an institution of the Church of Ireland established in 1711 by the British Queen Anne to build and improve churches and glebe houses in Ireland. It was funded from taxes collected from church incomes, which in turn was funded by tithes. The Board was replaced in 1833 by the Board of Ecclesiastical Commissioners.

On 9th May, 1825, William Le Poer Trench, M.A., clerk and administrator, took up residence in the Glebe House with a glebe of 40 acres. The Glebe House with a gate-lodge to the road-front which was demolished in 1999 was the home of the Rev. William Le Poer Trench, when in the 1800’s there was a Protestant community in Lissavalley. The living quarters were both a rectory and vicarage. No curate was employed. The Rev. William Le Poer Trench was a Rector of Killererin from 1849 to 1857. He then became the Rector of Moylough in 1857. He died in July 1868, aged 67 years. His wife, Marianne, died in August 1874, aged 73 years, and both are buried in the same grave in Moylough[2]. 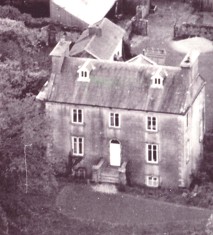 The church was eventually closed and united with Tuam in 1871. In October, 1916, a plaque that had been erected in Killererin church to the memory of Benjamin James Clarke, M.A. who had been rector for 14 years was removed and placed in St. Mary’s in Tuam, by order of the Tuam Vestry.[4] Later a memorial window was erected by his friends with another plaque underneath.

It may be of interest to note that his beautiful stained glass window was based on the “Five Sister’s window in the north transept of York Minster, U.K. that dates from around the year?[5]

The remains of the church are still to be seen in Lissavalley.  The number of deceased in the graveyard is uncertain but one headstone remains erect but slightly damaged. The name on the headstone is visible and it reads: “Ronaldson of Springvale”.

This headstone marks the final resting place of William Ronaldson. (1826-1872) of Springvale, which was erected by his wife Mary.

A plaque from the church was placed in St. Mary’s Cathedral, Church of Ireland, Tuam by order of the Tuam Vestry for safey. The plaque reads:

“In memory of Benjamin James Clarke, M.A., for 14 years Rector of this Parish. Born 16th November 1814 and died 22nd July 1871 Not everyone that saith unto me, Lord, Lord, shall enter into the Kingdom of Heaven, but he that doeth the will of my Father which is in Heaven.”

This memorial tablet taken from Killererin Church and inserted in the wall of St. Mary’s Cathedral, Tuam and is the only real intact memory of the Church which was demolished in 1952[1].

The following is a list of clergy that served in Lissavalley church from the 14th century onwards[2]: