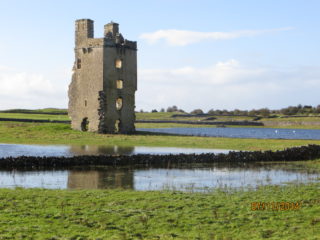 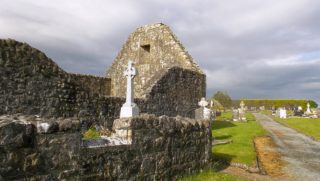 This parish, as a rectory and a vicarage with a high valuation put upon it as far back as the fourteenth century was of considerable importance in the olden times. In the Edwardine, Taxation it came under the Deanery of Tuam, and it was situated in the O’Kelly country. In the sixteenth century, we find the revenues of Killererin, Killascobe, Moylough and Abbey usurped by Malachy, Thadeus and Swarthy Donough O’Kelly. Tiaquin was the baronial estate of the O’Kellys, who were descended from Donnell-Mor, King of Hy Many, who died 1224. At one time they owned five other baronies, Athlone, Killian, Kilmaconell, Clonmacowen and Moycarne. We find them also in Donamona castle in Carra barony in the fifteenth century.

The name of the parish

The derivation of the name of the parish is somewhat elusive but, when we compare the forms of the name, which varied with the vicissitudes of the ages, it appears to mean the Church of the Coarse or Waste Division. Reidh means a coarse mountain flat and the name in Irish would be Cill-a-Réidh-Rinn. We find the name written in old documents: Kylleryran, and Kylleryeran, 1559; Killereran, 1574; Killareyrane, 1585; Kilirierin, 1591.

Very little is known about the monastery of Creevebawn except that it was founded for Carmelites by an Earl of Clanrickard in the fourteenth century and that, in the reign of Elizabeth, its goods and chattels and its lands amounting to one quarter in which were sixteen acres arable and twelve acres pasture, were granted to the burgesses and commonalty of Athenry. The rest of the land must have been covered with whins and underbrush from which it derived the name Creevaugh. In the 1574 list it is called the Cell of Crewan.

Killereran was both a rectory and vicarage and as such it was heavily taxed at over a pound in 1306, which would be over twenty pounds in modern currency. It was called then Doolough or Dublock according to Mr. Knox’s identification and he had access to original documents and expert assistance. In Bodkin’s day, Cornelius O’Melay had the rectory of Kelleryran but Malachy and Tady O’Kelly divided the emoluments between themselves. Thomas O’Huryn (Horan) was the vicar and had to give half the profits to Tady and Swarthy Donough O’Kelly.

In 1574, Killereran parish is registered in the barony of Dunmore merely as a vicarage and we get an idea of its rich emoluments from the fact that its valuation had increased to eight pounds in 1584 when, in the Valor Beneficiorum, the value of its rectory and vicarage was assessed at six pounds for the former and two pounds for the latter. Thomas Boorke was Rector and William, son of Maurice (Kelly) was vicar in 1591. The Cistercians of Knockmoy owned two quarters with tithes in the townlands of Grange and Coolrevagh.

And now we come to that famous ecclesiastical personage, the eminent architect and worker in stone and wood, Gobaun Saer, of whom we have heard so much and seen so little. But, here in Killererin is the “House of Gobbaun,” whose memorable name is in everyone’s mouth, whose fame was so great that in popular fancy he was idealised into a type of the finished craftsman and in the course of time into a term of sarcasm applied to pretentious architects, Jack of all Trades, and those who botched the building business.

And still Gobban actually lived his life on the scene of history in the seventh century, a contemporary of St. Abbhan and St. Moling. St. Abbhan founded Old Ross in Wexford, Findglass and Monasterevan monasteries and both he and St. Moling and, apparently, Gobbaun were natives of Hy-Kinsella in Leinster. A prophecy attributed to St. Abbhan stated that the name and fame of Gobban would last for all time in Erin and, in St. Moling’s life, there is an account of an oak-house, or duirteach or dairteach, made by Gobban the craftsman and “mirabile dictu”, the cave in which the wife of this illustrious church builder was buried was rifled by the Danes in 862.

The name of Gobban or Gobbaun is enshrined in Kilgobbin near Killala and Kilgobbin near Dublin. Popular tradition holds that he erected the round towers of Killala, Kilmacduagh, Antrim and Kilgobbin and the house associated with his name casts an antique lustre over the parish of Killererin.